In many corporations it’s not easy to get people to talk at the level of needs and feelings, not to mention that they don’t recognize what theologian Walter Wink says is important to know — that every institution, every organization has its own spirituality. And when the spirituality of the organization is “production over all,” that’s the only thing that counts.

In such organizations, human feelings, human needs, humanness doesn’t matter. Ultimately, the company pays for it in terms of both morale and even production, because when you get people believing that their feelings and needs are understood, production will go up.

Another thing we teach business people is how to do performance evaluations that don’t criticize employees when they don’t do what supervisors like. In this sense, we teach teachers the same thing. We also teach parents how to evaluate without criticism.

I was explaining this to managers in one company. I started by saying something that’s part of our training — how to make clear observations, how to get people’s attention by expressing what they’re doing that you don’t like.

I asked this group of managers I was with this question: “For example, what behaviors would you like to work on today that are problematic among the employees?”

One said, “Some of these people are just disrespectful of authority.”

I said, “Just a minute. That’s what I would call a diagnosis. I’m asking what they do. You want to evaluate somebody’s performance. If you tell them they’re disrespectful, you’re likely to create a defensive response. What you see is what you get. I would suggest if you want to evaluate people in a way that improves performance, start with a clear observation.”

He couldn’t do it.

Another manager said, “Well, I’m working with employees who are lazy.”

I said, “Sorry, that’s another diagnosis. It didn’t answer my question about what they do.”

And one of them finally said, “Darn it, Marshall. This is hard.”

Krishnamurti says the ability to observe without evaluating is the highest form of human intelligence.

When I was showing them how to make observations, one of the managers jumped up; he literally ran out of the room. The next morning he came in and apologized for his abrupt departure. He said, “You know, yesterday, when you were showing us how to do performance evaluations and how to be sure that you make clear observations and not use any language that sounds like criticism…?”

“Yeah, I remember that.”

“The reason I jumped up and ran out on your training yesterday was that while on my way to the training I had stopped at the office and dropped off my performance evaluations for my secretary to type. In the first 20 minutes yesterday you showed me why it’s a nightmare of mine every year when it’s time for performance evaluations. I can’t sleep nights before that time. I know that a significant number of them are going to get hurt and angry. It’s going to make matters worse. And you showed me right away that I was confusing observation and evaluation. So I ran back to get my evaluations from the secretary before she typed them up.”

He continued: “I was up until 2:00 a.m. last night trying to figure out how to be clear about what the employees do that I don’t like, without mixing in diagnosis or criticism.”

And of course you don’t have to be in a leadership position at a corporation or place of business to understand or use this work. You can be at any level in the business. By distinguishing between observations and evaluations, we can very far in building teams built on trust and mutual respect, which has a positive impact on all other aspects of the organization. 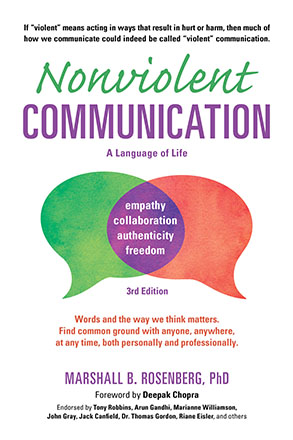